BlackBerry Messenger, aka BBM, is back with a new update today, which introduces a selection of new sharing options and services for users around the globe. The update includes the ability to share photos and videos to Feeds, as well as some regional specific features including the new BBM Game Center and Voucher scheme.

Starting with the new media sharing features, users can now post photos directly into their feed, in addition to the old text based updates. To facilitate ease of use, there’s a new photo icon in the app’s Feed tab which will let you take a photo, crop it, add a caption, and share. BBM Channel owners will also find that they can upload videos to their feed as well. You’ll have to go through the process of uploading the video to Vidio.com first, login to the Channel Management Console, and then paste in the link before publishing the video to the Feed. Not exactly simple, but at least the feature is there now. 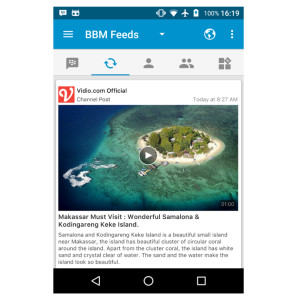 There are also some tweaks applied to the BBM user interface. Contacts will now display in a list by default, the option to Scan Barcode is now in the main menu, there’s a 25-second default timer for message saves, and names are now required in Group chats to keep everything organized.

For Indonesian users, the latest version of BBM also now includes the BBC Game Center to compete with your friends. The service goes live on November 1st and will be introducing new games over the coming weeks. The company’s Voucher and Pulsa services, which went live earlier in October, are also packed in, allowing customers to pay bills and top-up airtime, as well as grab vouchers for a variety of local stores, restaurants, and services.

Speaking of airtime top ups, Nigerian BBM users will also be able to buy more airtime for their phone or purchase a gift for someone else with the new Airtime icon on the Discover menu. These new monetized services are powered by BBM Checkout and it seems that this will form a core part of the messenger service’s business model going forward. BlackBerry says that it will have more announcements to make in this regard in the coming weeks.