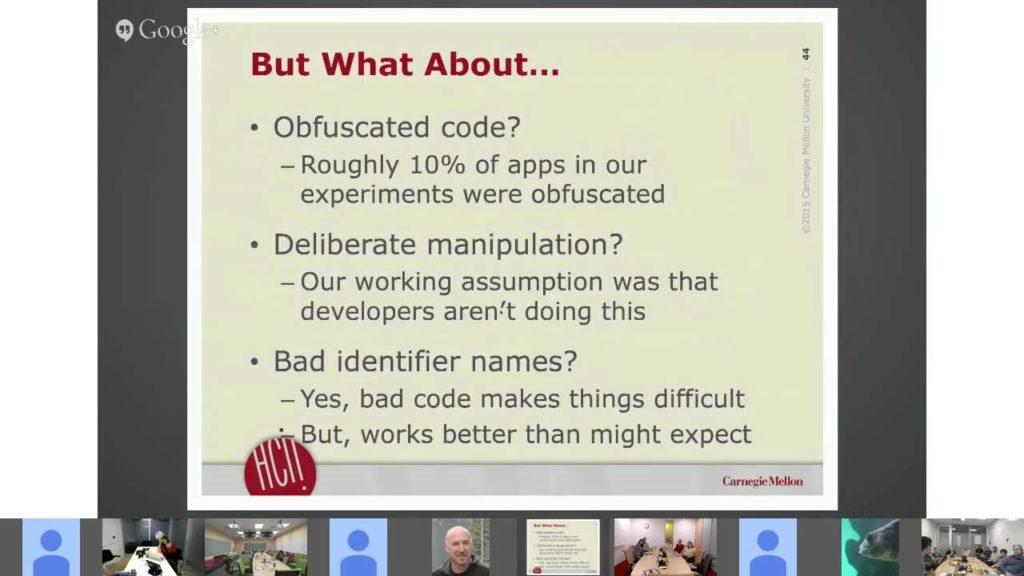 ABSTRACT:
Many smartphone apps collect sensitive data about people, in a manner that many users find very surprising. How can we help everyday people in understanding the behaviors of their apps?

In this talk, Jason Hong presents three things. The first is results of interviews and surveys of app developers, probing their attitudes and behaviors towards privacy. The second is PrivacyGrade.org, a site that combines crowdsourcing and static analysis to analyze the behavior of 1M Android apps. The third is Gort, a tool that combines heuristics, crowdsourcing, and dynamic analysis to help analysts understand the behavior of a given app.

Since the original presentation, Android M launched a new permission model that Hong described as «offer[ing] a lot more privacy protection for people, primarily by making it easier to see what data is being requested as it is being used.»

ABOUT THE SPEAKER:
Jason Hong is an associate professor in the Human Computer Interaction Institute at Carnegie Mellon University. He works in the areas of ubiquitous computing and usable privacy and security, and his research has been featured in the New York Times, MIT Tech Review, CBS Morning Show, CNN, Slate, and more. Jason is also a co-founder of Wombat Security Technologies, and has participated on DARPA’s Computer Science Study Panel (CS2P), is an Alfred P. Sloan Research Fellow, a Kavli Fellow, a PopTech Science fellow, and currently holds the HCII Career Development fellowship.